As we reach the end of September it’s truly ‘Semi Final’ season. Last Friday our Minors were in premier semi final action. On Sunday at high noon the Junior B hurlers qualified for their East Cork semi final Later on Sunday the Senior Ladies football team went to Clonakilty and their win ensured a semi final spot. This weekend is a huge win for the Club as our Senior Hurlers are in the Championship semi final and our C Grade hurlers are also in Championship action so it’s all go After a great game above in the Mardyke the Minors were defeated by Killeagh. The Junior B team had an easy win over Midleton’s fourth XV. The scorelines for these contests were as follows;

East Cork Junior B Hurling Round 3 Round Robin Bride Rovers 0  33 Midleton 0 6. It’s Fr O Neills once more in the Semi Final of the County Senior A Hurling Championship next Saturday in Pairc Ui Chaoimh. Two years ago in Pairc Ui Rinn O Neills defeated us in a Group game and last year in the semi final we lost to the Ballymacoda/Ladysbridge side in Pairc Ui Chaoimh.

We travelled with confidence last Friday evening to the historic Mardyke grounds ‘on the banks of our own lovely Lee’ to take on Killeagh in the Premier 2 Minor Hurling Championship semi final. Killeagh by winning all their group games went straight to the semi final whilst we had a super win over Aghada in our quarter final. It was a ding dong game but Killeagh’s two goals in the third quarter proved decisive. The game started at a fast pace, the sides traded points inside two minutes -our opening score was a brilliant free from  goalkeeper Ronan O’Riordan deep in his own half. The game  was extremely competitive, the sides were level on a number of occasions and were deadlocked after 12 minutes at 0-4 each. Killeagh thern went two ahead but Cillian Barry brought it back to a single score game. In fairness our defence were playing very well dealing with the Killeagh forwards. After points were swopped Killeagh hit three in a row to lead 10/6 near half time. Conor O Riordan pointed but Killeagh then raised three white flags to lead by 13/7 at the short whistle. We had two early points in the second half but crucially at this stage we had a few wides which if converted would have brought us much closer. Then in 090 seconds Killeagh hit two goals and suddenly we were 10 points down. In fairness our lads then tore into the game and scored 12 without reply – the goal from Conor O Riordan. When Conor raised a second green flag we were right back in the game. We battled bravely right to the end but a six point loss, 2 21 to 2 15 was the outcome. Oh lads what a  brave display from a talented panel who can hold their heads high  after giving parents and supporters a great championship run     The lads will now progress to Adult hurling with the club and we wish them continued success. These lads are a credit to their parents and the club   The future is bright. Already they are asking about 2023 -will Minor be under 17 or under 18, will we have under 19 or under 21? It’s awful to say that we just don’t know. The Special GAA Congress to sort out all these matters was cancelled and now no decision on Grades will be made before next February which is totally unsatisfactory.  Team Panel;  Ronan O Riordan,  Eldon O Connor, Kieran Cotter, Darragh Kielty, Adam Hynes, Denis Cashman, Jack Collins, Cormac Barry,  Cormac O Sullivan,  Cillian Barry,  Kamso Obi,  Louie Roche, Connor O Riordan,  Frank O Flynn, Ryan O Callaghan,  Gearoid Gubbins,  Ben Knox,  Colin Hogan,  Oran Kielty,  Cameron O Sullivan, Ciaran O Dowd,  Cillian O Sullivan., Gearoid O Connell, Luke Harrington, Thomas O Riordan
Selectors;
Eddie O Callaghan.  Ken O Riordan. Denis Ahern. Bill o Flynn, Physio Chloe Ahern
Sponsor; Denis Ahern Hurleys.

We travelled to Pairc Ui Chinneide in Killeagh to play our final Junior B group game on Sunday morning. We were after winning our 1st two matches against Cloyne and Sars and knew a win on Sunday would advance us to the knockout stage of the championship. Our opposition was Midleton’s fourth team.

We started very brightly and a score from Seamus Ahern in the opening minute helped us settle. For the first 15 minutes it was nearly score for score with points being exchanged and after 15 minutes we had a lead of 8 points to 5. The lads started to take control in the second quarter and six more point before half time saw us leading on a score line of 14 points to 6 at half time. The second half followed the pattern of the first and with some brilliant shooting we added 19 more points in the second half to leave the final score 33 points to 6.

We now advance to the Semi-Final where we will meet the winners of Castlelyons and Aghada who play this Sunday.

Well it’s back to GAA HQ in Cork on next Saturday evening once more for our Senior Hurlers. There’s a huge prize of a County Final appearance at stake as we face up once again to East Cork rivals Fr O Neill’s. Having lost the last two County Finals in this grade Fr O Neill’s have been tipped as favourites to win the SAHC title ever before a sliotar was pucked. They qualified for this semi final by winning all three of their Group games in some style. Our displays have been excellent also, particularly the games against Carrigtwohill and v Cloyne in the quarter final. On the other hand we struggled to get on top against Ballymartle but still got a great result in the end. Above in Kildorrery we found Ballyhea very tough opposition and trailed at times but a late Adam Walsh pointed free got us a draw. We know that Fr O Neills are a vastly talented team with Minor and under 21 County titles won but we have also captured similar accolades so we can be sure our lads will not be found wanting on the night. Because Fr O Neill’s beat us last year – though they fielded without Dalton and Dunne, they have been installed as hot favourites. In fairness to our team they have played lovely hurling this year. They are well aware that to beat Fr O Neills they will have to produce a top class display for the entire game. Training has gone well over the last few weeks. All we can do now is get behind the lads in every way possible. Go for it boys, c’mon the Rovers! A reminder that our game is down for decision on Saturday night at 7.30pm, tickets must be pe-bought. The curtain riser is another East Cork Derby with Castlelyons meeting Castlemartyr in the Premier Intermediate semi final, throw in at 5.45. We wish our neighbours Fermoy all the best in the other Senior AHC Semi Final. They take on Courcey Rovers on Friday night in Pairc Ui Chaoimh at 7.30pm. Don’t forget that at half time in our big game our Juvenile players will again take to the pitch to play Fr O Neills.

In preparation for the County Semi Final we are very grateful to both Castlelyons and St. Catherine’s for allowing us to train under lights in their pitches.

Our under12’s played their football League Final on Sunday last v's Cobh in an excellently turned out Ballinacurra pitch. We knew we were up against a good Cobh team and that showed as Cobh got off to a fast start with 2 early goals. However this kick started our lads into action and for the next 40 mins they went toe to toe with them. To say we are proud of the boys would be an understatement.  They worked so hard for the whole game, never giving anything easy to the opposition.  We got it back to 2 points with about 10 mins left and had a couple of chances that just didn’t come off. Cobh got a late goal and a couple of points to win on a score of 4-5 to 2-2. Team on the day was:  Matas, Cathal M, Cathal O'B, Sam, Danny, Cormac( captain), Ciaran, Nathan, Liam, Cody, Sean H, Fionn L, Sean F,  Fionn C, Zack, David, Jack, Alex, Daniel and Sean O'L.

While the loss was hard on the boys if Sunday is anything to go by this team has plenty good days ahead of them. Definitely no shortage of heart, skill and determination -well done boys on a great display and it’s super to see the improvement during the season.

We have Hurling v's Killeagh on Sunday next at 2 in the juvenile pitch.

Our Junior C team had a hurling challenge lined up for Pynes last weekend but unfortunately our opponents were unable to field. So it’s on to Pairc Naomh Caitrionaigh on this coming Friday night for our opening game in the Junior CHC Round Robin campaign when we meet the home side under lights at  7.30pm. Best of luck to the players and management.

On Tuesday September 13th our Lotto Jackpot was €10,400.  The  four numbers drawn were  2, 3, 6, 22 and there was No Winner. Congrats to our lucky dip €30 cash winners: Evelyn Collins, Coolnakilla, William Connolly, Castlelyons, Sophie Quirke, Terramount, Cathy Drislane, Castlelyons and Barry Hazelwood, Toberneague. If you purchase your ticket online and  your ticket has expired we would appreciate if you would enter again via https://bit.ly/BrideRoversweeklyfundraiser A reminder that Tickets at just €2 each can be purchased from Club members and in local business outlets. Thank you again for all your support. The jackpot  for last Tuesday September 20th 2022 was € 10,600, as well as 5 lucky dip cash prizes.

Our under 6 players are really enjoying their training sessions and blitz type-games. They played Whitchurch last morning in a hurling blitz in Whitchurch. It’s just great for the lads to be playing against teams that in the past we would never have met. Our lads were brilliant from the get go.  Scores are never important in these contests, it’s just the performance and both teams put on a mighty display of hurling skills. Whitechurch will travel to Pyne’s field this Saturday morning to play us in a football blitz.

The East Cork Scor Final took place in Lisgoold Community centre last Sunday evening. Unfortunately interest in the Scor competition is very low and having the Final at this time of the year is of no benefit. Just 3 Clubs participated Bride Rovers, Youghal and Glanmire.  We took part in Nuachles, Scealiocht and Trath na gCeist winning the Novelty Act and the Storytelling sections and the overall Felix Sarsfield Cup. Mile buiochas to all those who represented Bride Rovers. We also participated in the Scor Trath na gCeist County Semi Final in Pairc Ui Rinn earlier in the week. Millstreet, Killeagh and Valley Rovers qualified for the County Final. 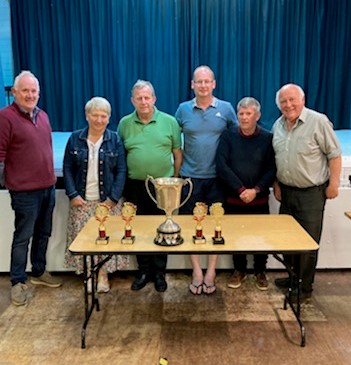 UNDER 9’s IN ACTION.

Our U9’s are busy preparing for their hurling exhibition half time match against Fr O’Neill’s next Saturday night. The players are very excited and following on from the u10 successful game against Cloyne, Emma Roddis has worked her magic and arranged this game. Please give as much vocal support as possible for our stars of the future.