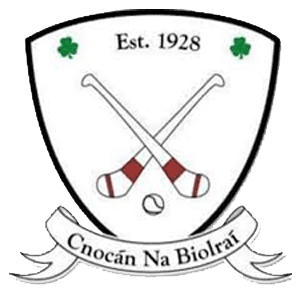 On Friday evening last, on a damp drizzly evening, our U-17 team opened their championship campaign with a 1st round game away to Nemo Rangers in Trabeg. In the opening quarter, there was nothing between the sides and a combination of poor conditions & wayward shooting left the score at just 0-2 to 0-3 with us just having our noses out in front. The half continued in the same vein, but as conditions deteriorated further, scores were no easier to come by. At the break Nemo were just ahead 0-5 to 0-4 despite the best efforts of Ryan Loftus at Full-Back and Sam Dennehy at half-back, placed balls were still the main source of scores. In a bizarre turn of events, resumption after the break was delayed when referee Frank O’Dwyer raised concerns with the home side about a large hole on the 21 yard line potentially endangering player safety. With both sets of coaches consulted, it was agreed to proceed but the protracted break did nothing to help the players who were eager to get going after the interval. There was again nothing between the sides in the 3rd quarter with the side level on 0-9 each after 25 minutes but the loss of Liam Foley early in the 2nd half was beginning to have an impact on Watergrasshill’s ability to create scoring opportunities. This was further hindered with the loss through injury of Cian Cronin-O’Neill who was beginning to create and indeed take some great scores. The pivotal score came on 29 minutes where Nemo registered the only goal of the game and with the bench emptied, the game slipped away from Watergrasshill with Nemo winning out 1-10 to 0-9. The final score was harsh on Watergrasshill who were well positioned to come out on top. We wish Liam and Cian speedy recoveries as the lads face Cobh and Kiltha Óg in coming rounds.

On Wednesday evening, our U-15’s opened their championship campaign. On the back of a winning league final the previous weekend, the boys continued their run of good performances with a solid win away to Mayfield 3-6 to 4-16. Next up are St. Catherine’s on August 3rd with Lisgoold on August 31st.

Our U-13’s were unlucky to lose out to table topping St. Catherine’s in their league game on Saturday morning. The final score of 3-6 to 1-13 left the margin at just one point. Great credit to the Watergrasshill lads who battled right until the final whistle, not unexpected from this bunch whose effort and commitment are hallmarks of their team – hard luck lads and best of luck for your remaining games.

Lastly, there’s a massive game ahead for our Intermediates this Saturday when they face Éire Óg in the 1st round of the Championship in Blarney at 4:00pm. It’s been a tough league campaign for the lads but we wish Jason, Pat and the entire panel all the very best for the match and the upcoming campaign. There’s been a massive amount of work put in by all the lads and everyone at the club is behind them this weekend.

Excitement is building ahead of our upcoming Cúl camp which will be running from 15th August to 19th August in Watergrasshill. With over 200 kids registered, this promises to be one of our biggest and hopefully most successful camps in recent years. Given the restrictions on camps over the past 2-3 years, this year is sure to be a fun week for all the kids involved. As always, we are looking for coaches, supervisors and camp assistants so please reach out to Barry Joyce is you can assist in any way during the week to help make this years’ camp a success.

As you may have noticed, our newly opened match-day café “An Cupán Tae” is now up and running. An Cupán Tae is based in our clubroom and will be open on match-days providing tea, coffee, soft-drinks and snacks. Keep and eye on our social media channels for detailed opening hours and please do pop in and say hello and grab a snack before, during or after one of our upcoming home games.

There was no winner of the Lotto Jackpot this week. Numbers drawn were 1, 18, 24 & 28. Lucky dip winners are Eric Daly, Brendan Leahy, Helen O’Driscoll & Tom and Davey c/o The Hut. Congrats to you all. Next week's jackpot is €2,800 and draw will take place Monday 1st August in The Fir Tree Bar. Tickets are on sale in some of the village businesses like The Hut Bar, The Fir Tree, Johnny's Shop and our new Lotto stand in Ross's Centra. Tickets can also be purchased on-line via our club website (www.watergrasshillgaa.ie). The Club would like to take this opportunity to thank all our members and supporters of the Watergrasshill GAA Club Lotto. The Club Lotto is a vital source of income for the running of all our teams within the Club and for future development of our facilities, so we ask you to please support it if you are in a position to do so. Remember, if you’re not in you can’t win.