CLUB CHAMPIONSHIPS ONLY AROUND THE CORNER.

There are also Club Season Tickets for County matches that cost €150 for all games run by the Cork County Board. Please, this ticket does not cover games run by the East Cork board or by Rebel Óg.

In East Cork, our Junior A Hurlers will be out in action against Fr O’Neills on Monday August 1st at 7pm in Midleton. This game is €6 cash at the gate.

Meanwhile, our Junior B Hurlers will be in first round action against Youghal on Sunday August 7th at 12pm in Shanagarry. Admission for this gate is €5 at the gate.

HARD LUCK TO OUR JUNIOR FOOTBALLERS

Despite a gallant effort, our Junior Footballers came up short against Bride Rovers 1-11 to 1-7 in Lisgoold and in doing so failed to qualify out of group stages in the competition. Thanks to all who contributed in any way during the season.

BEST OF LUCK TO KILLEAGH GIRLS AND CORK CAMOGIE

Best wishes to Laura Treacy, Chloe Sigerson and Hannah Looney of the Cork Senior team and Ciara Daly and Stefanie Beausang of the Cork Intermediate team who are in their respective All Ireland finals on Sunday August 7th in Croke Park. Best of luck ladies from all at Killeagh GAA

On Friday July 15th, we travelled to Carrigtwohill to play our first championship match of the year. Results in the league were patchy for various reasons so we were more hopeful than confident of getting off to a good start. The boys showed no such fears and ran out deserving winners on a score line of 5-12 to 1-7. We started very well and raced into a five point lead but Carrig gradually whittled away our good start and with little between the sides we scored a good goal just before half time to give us a bit of breathing room. On the resumption we started well again and kept going to the finish line.

It was great to see lads who were involved last year like Jack O Connor and Diarmuid Buckley push on this year and give good accounts of themselves. Likewise with Ethan O’Driscoll and Martin Power playing their first championship match at U17 level and you wouldn’t know it. On the night 4 U15’s, Fionn Brennan played in goals and John Ogbebor centre forward, Eoin Roche and Cian O’Riordan from the bench, all had a positive impact on the match. Led by our captain Darragh O’Brien the boys are up and running but we need your support for our next outing against Erins Own this Friday July 29th at home to push us on to the next level.

Last Friday, we were away again in Caherlag against Erins Own for our first hurling match. After an entertaining first half we led at the short whistle by 12 points to 6. This was a tough encounter and a high quality match. Ably led by our captain Dylan McCarthy the lads put in a good shift including our younger men Oran Cunningham and Fionn Brennan. The highlight of the first half was a great team move which led to a good point by Martin Power.

We had it all to do in the second half and the boys went about their business in determined fashion culminating in a fine goal by Sean Meade. At this stage we led by 9 points but back came Erins Own and our cushion was only 3 points heading into the last quarter. Knuckling down again we upped our game and after a fine save by Fionn Murphy we pushed for home and ran out deserving winners on a score line of 4-16 to 15pts. From the bench John Ogbebor, Eoin Roche and Tadhg Considine helped us get over the line. Now is the time to work hard in training and build on this promising start.

Killeagh travelled to Midleton on Sunday July 17th to take on table toppers Midleton in the final of the division 1 league. Temperatures were already at 20 degrees Celsius by the time the ball was thrown in at 11.00 am.

The first half was very even but a break through goal from John Ogbebor set the tone for the reast of the game. Midleton responded with a goal but the Killeagh lads kept their heads to tap over a point and finished the half by well worked team goal and slotted to the net by Cathal Brennan leaving Killeagh 3 points up at half time.

A fantastic start to the second half saw Killeagh score 1-1 without reply after Ben Geary slotted over a tight angled free and a superbly finished goal. Further points were tagged on by Ben Geary, Cian O’Riordan, Cormac Deane and Callum Power. All in all, this was a very fine display of football from Killeagh to finish off a very good week following on from their Shield hurling final victory over The Barrs last week.

Killeagh Under 15’s played their first match of Under 15 hurling championship at home to Kiltha Óg on Wednesday 21st July. We didn’t settle well and struggled for long spells in the first half. Kiltha deservedly led at the break by 3-10 to 0-5.

The second half saw an incredible turnaround. Killeagh struck early for a fantastic individual goal from John Ogbebor (who had an outstanding second half), this was quickly followed by another goal after a cool finish by Callum and a superb point from play from Cormac after a storming 60 yard run to reduce the gap to 7 points. With our defence getting on top (superbly marshalled by Oran and Cormac) and a good supply of ball going into the forward line from Cathal, Andrew and Fionn the momentum shifted. Roared on by a vociferous home crowd we scored further goals from the ever-improving Cormac Delaney (3) and a great finish from Callum along with a series of superb points from Ben saw us turn a 14 point deficit into an 8 point win.This was a big result to start the championship. The lads showed immense character from 1 to 15 to fight back after a really poor first half.

Next up is Under 15 Football Championship versus Midleton on Wednesday 26th July in Killeagh.

Our club shop is now open every Saturday morning from 10:30am until 11:30am to buy your Killeagh GAA or Camogie merchandise.

All bookings for pitches, ball alley and meeting rooms for 2022 will need to be booked via email only, pitchbookings.killeagh.cork@gmail.com

We ask all teams, mentors & club members to respect this decision for the 2022 season.

Our walking facility will remain open for all members of our club and the community during the season.

KILLEAGH GAA LOTTO ON THE RISE...

But, if you cannot get to the local businesses during the week before 8pm Tuesdays and you wish to enter the draw online, you can buy tickets up to 8:15pm on Tuesday evening at https://bit.ly/Killeagh! Remember, no queues, no delays, the Killeagh GAA Online Lotto is always a great and easy way to Play!! Remember, if you are not in, you cannot win!!  Every €2 helps a major part in the running of your club. We thank you in advance for your support as we meet our financial commitments on a monthly basis. And don’t forget to share our Social Media posts too to let more people know about our superb Lotto Jackpot!

Round 1; Killeagh vs Courcey Rovers in Ovens on Sunday July 31st at 2pm

Round 2; Killeagh vs Blarney in Caherlag on Saturday August 6th at 5pm

Round 1; Killeagh vs Youghal in Shanagarry on Sunday August 7th at 12pm

Round 2; Killeagh vs Erins Own in Killeagh on Friday July 29th at 6:30pm

Round 1; Killeagh vs Midleton in Killeagh on Wednesday July 27th at 6:30pm

Round 2; St. Nicks vs Killeagh in Glen Rovers on Wednesday August 10th at 7pm

Killeagh vs Glenville in Killeagh on Saturday August 6th at 11am

Killeagh vs Glenville in Killeagh on Monday July 25th at 6:45pm

Killeagh GAA, Killeagh Camogie & Inch Rovers LGFA Nursery for boys and girls born in 2017, 2018 or 2019 continues every Saturday 11:45am to 12:30pm in the main pitch in Killeagh GAA Grounds (Pairc Ui Chinneide). Turn left when you come inside the main gates. Please fill in the form below before you come if you haven't already done so. https://docs.google.com/forms/d/e/1FAIpQLSeziDYGEr7KtX2WYjeHmjnm64V4i__PhAwRBJiGgo74-H7Awg/viewform?vc=0&c=0&w=1&flr=0

We will be looking for helpers (moms, dads, siblings & friends) to join in with the activities and with setting up, tidying up etc. You don't need any equipment for the children on Saturday but if you do want to buy them a hurley or other stock, our club shop will be open from 10.30 to 11.30 every Saturday morning (in new building at opposite end of grounds).

Many thanks to all our supporters, patrons and team of volunteers who made our latest Golf Classic a massive success. 137 teams played the classic over the four days. Congrats to all our prize winners and we look forward in seeing you all back at West Waterford Golf Club from July 12th- 15th 2023. (Results are attached on file)

Our next Golfer of the Year competition is to Cobh Golf Club on Thursday August 18th, timesheet is now opwn with Ray on 087-2330054.

If you are interested in joining the Killeagh GAA Golf Society for their variety of trips away & outings for 2022, give Ray Rochford a call or a text on 087-2330054.

Remember, stay tuned to our social media channels on Facebook ‘Killeagh GAA’ or Twitter @KilleaghGAA for further up to date information on club.

DATES FOR YOUR DIARY: 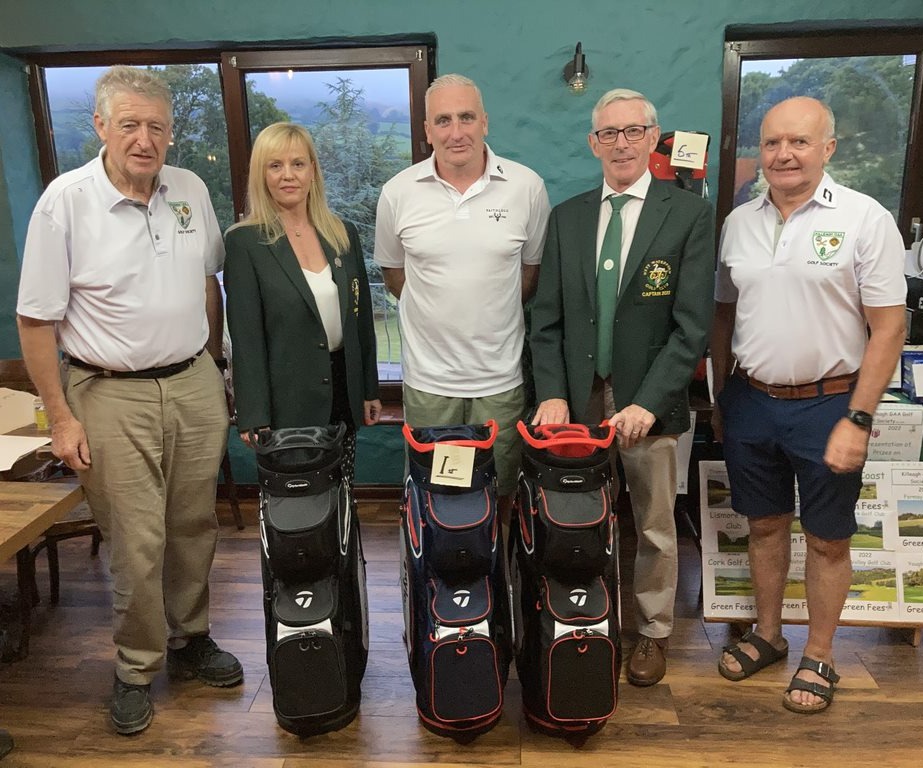